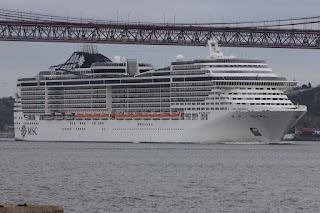 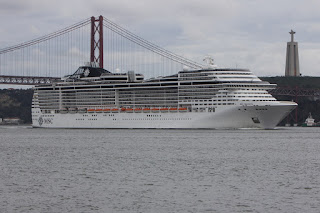 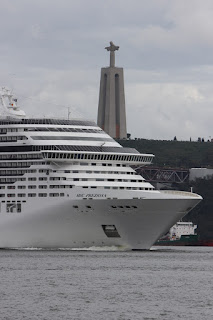 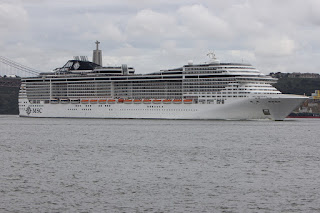 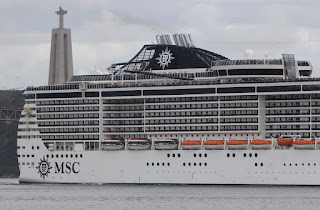 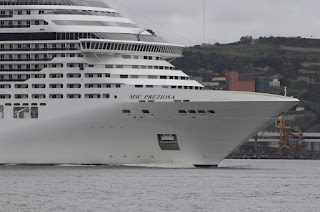 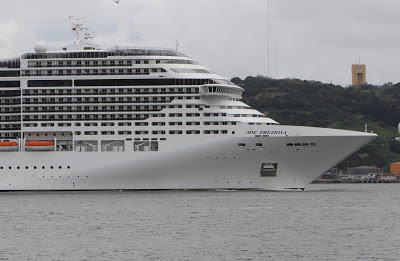 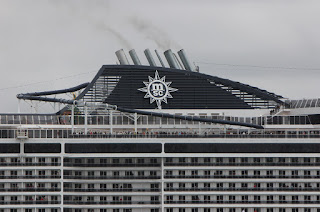 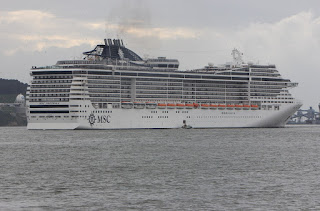 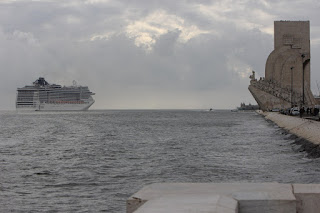 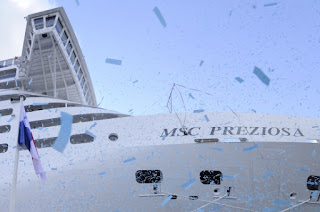 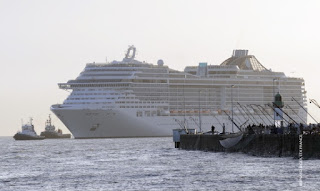 14 March 2013 - This morning in Saint-Nazaire, France, MSC Preziosa was officially delivered to MSC Cruises at the STX France shipyard.

During the traditional flag ceremony, the shipyard’s pennant and the French flag were lowered, accompanied by the French national anthem, before Laurent Castaing, General Manager of STX France, formally handed the ship over to MSC Cruises’ owner Gianluigi Aponte. Mr Aponte then gave command of the ship toCaptain Giuliano Bossi, and the flags of Italy and MSC Cruises were raised to the sound of the Italian national anthem.

The honour of cutting the ribbon fell to Alexa Aponte Vago, MSC Vice President. After the traditional breaking of a bottle of champagne, three blasts from the ship’s siren signalled the end of the ceremony.

“We are here today to celebrate MSC Preziosa, the 12th addition to MSC’s state-of-the-art fleet and our fourth Fantasia class ship, whose arrival means that MSC Cruises is now the world’s third biggest cruise line,” said MSC Cruises CEO Pierfrancesco Vago. “Thanks to our longstanding and effective collaboration with the STX yard, we have been able to successfully fine-tune our product year upon year. With her unique features and outstanding favourites such as the MSC Yacht Club, I believe MSC Preziosa now brings the MSC Mediterranean experience to perfection. MSC Preziosa completes a cycle, crowning an investment programme of over 6 billion euros started in 2003, through which we have realized our ambitious vision of building 10 new ships in just under 10 years.”

In his speech, STX France's General Manager Laurent Castaing added: "Growth and development: these are the characteristics that have defined MSC since the very beginning of their journey into the world cruising, and we are proud to have been involved at every step of the way. Over the past decade, each ship in the MSC fleet has come to life in these docks: a testament to the confidence that MSC has placed in our shipyard year after year. Each new class of ship that we have conceived together has evolved to reflect the highest possible standards in comfort, technology and security available. MSC Preziosa is no exception, and she will take to the seas boasting the latest innovations in each of these areas.”

After the closing of the flag ceremony, MSC Preziosa today began her pre-inaugural 9-day/8-night cruise from Saint-Nazaire. She will call in Lisbon, Portugal,Cadiz, Spain, Casablanca, Morocco, Valencia, Spain, and Marseille, France, before arriving in the port of Genoa on Friday 22 March, ready for her official christening ceremony the next day. The highlight of the christening event will of course be the cutting of the ribbon and the naming of the ship by screen legendSophia Loren.
MSC PREZIOSA
Posted by Portugal Photo Ships at 1:29 PM No comments:


NEW YORK: Australian billionaire Clive Palmer revealed his grand design plans to build a modern-day replica of the doomed Titanic, confirming the cruise liner would make its maiden voyage in 2016.
At a press conference in New York on Tuesday, and following a rendition of Celine Dion’s My Heart Will Go On, Mr Palmer told the world’s media construction of the 835-cabin ship would begin in China later this year.
The billionaire, who used the honorific ”Professor”, awarded by Bond University in 2008, for the announcement, said 40,000 people had already registered for tickets on the first voyage, which will retrace the fateful 1912 trip from Southampton to New York, in which more than 1500 passengers and crew died.

Among those interested were 16 who were willing to pay between $750,000 and $1 million for a spot.
Refusing to divulge the cost of Titanic II (”I have enough money to pay for it, so that’s all that really matters”), the 58-year-old said it was not about money but recreating the romance and memories of a bygone era – minus the iceberg.
Passengers aboard the 10-deck ship will be provided with 1912-style outfits to wear during their holiday and there will be no phone or television – and he was debating about internet access.

Cruise power … the propellers on the original titanic. Photo: Titanic In Photographs: Klistorn

Titanic II will have Turkish baths, a smoking room, casino, theatre and hospital. Key differences to the original include a high-tech engine, airconditioning and a safety deck with more lifeboats (including 18 covered motorised lifeboats).
As with the original, there would be first, second and third classes and they would not be allowed to mingle. Mr Palmer said he would be travelling third class, dressed in a wig and 1912 garb.
”I like Irish stew and potatoes … . I’m looking forward to banging the drums, playing the fiddle and getting dizzy as I twirl around like Leonardo did in the movie,” Mr Palmer said, referring to the 1997 blockbuster, which starred Leonardo DiCaprio.

Making history … the orginal Titanic leaving Southampton on her ill-fated maiden voyage on April 10, 1912. Photo: AFP/Southampton City Council
At the press conference, Mr Palmer provided Helen Benziger, of Wyoming, whose great-grandmother survived the 1912 disaster, the chance to speak. She said she was ”thrilled” about the project ”because the professor has assured me he will honour those passengers that perished and survived”.
Mr Palmer said Titanic II would be the safest cruise ship in the world but, when asked if it would be unsinkable, he said: ”It’s very cavalier to say that. I think people have said that in the past and lived to regret it.”
Read more: http://www.smh.com.au/travel/travel-news/professor-palmers-ship-comes-in-20130227-2f6d3.html#ixzz2MGsuN41M
Blue Star Line
Posted by Portugal Photo Ships at 4:05 AM No comments: 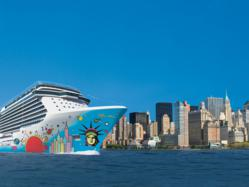 In the past decade, Cruise Travel Outlet has seen a tremendous increase in the demand for cruises from Boston, specifically with Norwegian Cruise Line. Norwegian Cruise Lines is currently the only cruise line offering Boston to Bermuda cruises. Geographically, it is easy to see why this particular itinerary is so convenient for the majority of Cruise Travel Outlet’s clientele. However, the Norwegian Breakaway’s New York to Bermuda itinerary satisfies a growing demand for Bermuda cruises from New York.

“I don’t believe this peak in interest of cruises from New York is a coincidence; clients are eager to get on the Norwegian Breakaway!” exclaims Julie Walsh, Cruise Travel Outlet’s Marketing Director. She goes on to explain, “Although New York is a little further from home than Boston for some of our clients, we are making an extra effort to get those clients to New York and make their Norwegian Breakaway experience as carefree as possible.” For the convince of their clients, Cruise Travel Outlet is offering a bus out of Braintree, MA to New York City so their customers can experience the NCL Breakaway without the hassle of driving or flying to New York.

NCL Breakaway will be broadcasting three award-winning, live Broadway shows: Rock of ages, Cirque Dreams Jungle Fantasy and Burn the Floor. There will be plenty to do for kids of all ages aboard the NCL Breakaway; with the fastest water slide at sea, a 3 story sports complex, the biggest ropes course at seas, Nickelodeon fun, kids' aqua park and more, kids will experience endless entertainment! Grown ups can escape to the Vibe Beach Club, and dance the night away at the adult only nightclub, Spice H2O. Norwegian Breakaway’s godmothers, The Rockettes, will be at the inaugural sailing to wish the ship a bon voyage!

Following inaugural events, Norwegian Breakaway will sail a series of twenty-two, seven-day cruises from New York to Bermuda beginning May 12, 2013 through October 6, 2013. Julie Walsh says she is lucky enough to be one of the first to experience the NCL Breakaway. “Be sure to stay tuned to our Facebook page for an inside look on this magnificent ship!” Walsh adds. Cruise Travel Outlet will be posting their pictures from the Norwegian Breakaway Inaugural sailing upon its return; for an inside look be sure to “Like” Cruise Travel Outlet at: Facebook.com/cruisetraveloutlet.
Posted by Portugal Photo Ships at 3:58 AM No comments: 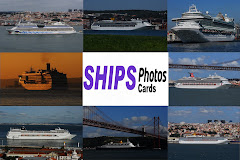 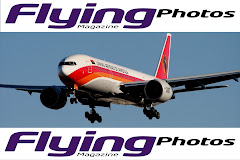